The Card Creator is the most unique feature of Collective, allowing players to design and submit their own cards easily using a wide array of provided tools. It is divided into two parts, the Art Editor and the Block Builder.

The link to the online Card Creator can be found here. 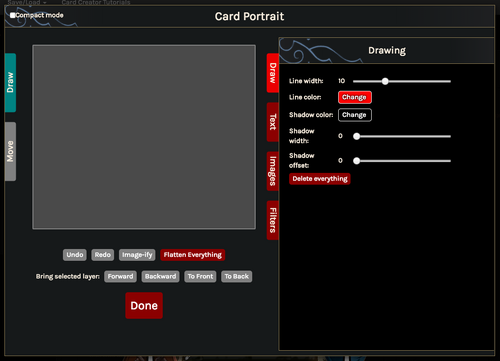 The Art Editor is a Paint-level canvas where all card illustrations are made. Only art made inside the editor may be used due to copyright concerns. The Editor functionality contains:

Colorpick Eyedropper: Chrome extension for displaying the hexcode of a specific area of color, for easy palette use.

Color Blender: Website for generating hexcodes of the gradient shades between two colors. To achieve a smooth gradient effect, draw strokes of each shade in sequence, then flatten all and blur.

Games-Icon.net: Website listing of all the games-icons, searchable by keyword. After finding out the name of your desired icon, locate it in the alphabetically arranged editor icon database for use. 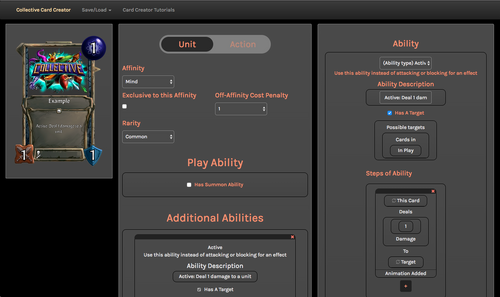 The Block Builder is a block-based field where all card effects are made. The Builder functionality contains:

The Function Blocks page lists out the most common editor blocks for players looking to build a specific effect.

The Builder Restrictions page lists out the current rules and effect limitations placed on the editor. Some are rules set by the devs, while others are functionalities waiting to be developed.

Note that cards may have both checked and unchecked continuously update boxes, depending on which of their abilities are one-time and which are continuous.

And = logic operation (true AND true)