Affinity identities are the pre-established mechanical repertoire each affinity has gained access to over the weeks. The precedent is all the cards that have made it in-game. Hero powers/rewards are generally ignored.

While there are effects that are exclusively of a single affinity, many fall under what affinity doesn't have access to the effect. Sometimes cards which feature effects that don't fit into any single affinity are made as Neutrals. For example, designs that have or give a very high number / random keywords would be these such as Everything Bread and Psychedelic Sheep.

Refers to returning a unit to its owner's hand, usually from play.

Single target hard removal effects that straight-up destroy or banish enemy units. Note that this category includes effects that shuffle a unit into its controller's deck and conditional hard removal like Scavenge and Fall of the Weak. It does not include Bounce, Blinking, Exhausting, Silencing, or putting a unit on top of its owner's deck.

Returning action cards from your graveyard to your hand.

Returning unit cards from your graveyard to your hand or play.

Effects that deal damage to units. This has a subcategory known as "Random pings" which refers to effects that randomly distribute 1 damage at a time. It's primary in Mind and secondary in Strength.

Banishing a unit temporarily but returning it back eventually.

Effects that can or strictly damage enemy heroes. Direct hero HP loss is counted under this as well.

Exhausting (enemy) units. Effects that give units "Can't attack" and/or "Can't block" can be seen as a subcategory of this (Quick Growth, Big Eyes, Haunt of the Patch, Gift of Peace, etc).

Niche category in which effects trigger or care about cards being in certain (multiple, different) zones. They tend to be recognizable when they explicitly use the word "zone." It includes cards like Wormhole Investigator, Where?, The Wurm and possibly Entwining Fates.

Effects that temporarily, usually for a single turn, increase the available mana of a player.

Units which grant an increase in mana through their static ability. Mana Maiden for example.

Effects that make the player draw a bunch of cards at one time. While this is mainly seen as primary Mind and secondary Spirit, it can appear in Strength when that card draw comes with specifically Strength drawbacks such as damaging yourself or sacrificing units.

Effects that draw a card of certain criteria - most often that being the card's type or a tribe.

New category "All" has been added for effects which have no particular affinity relation.

Most often cards with these effects are in this affinity. Sometimes an effect is so ill-defined in terms of affinity identity that it has no primary (or even secondary). Generally speaking, this probably means that there are less than 5 or so cards with the said effect (in any one affinity).

Competes with the primary affinity in effect usage. It might be debatable whether this affinity is the primary one for the effect (in the case of "Flying" for example).

Effect infrequently appears in cards of this affinity. They are somewhat of an anomaly or perhaps mostly unexplored design space. For example, certain tribes might have mechanical identities that slightly deviate from the affinity's identity in relation to an effect in general. Might at times partially merge into the "Exceptionally" category.

There are one or two exceptional cards in the affinity that feature this effect. They tend to be unique corner-cases (Vineyard of Desolation, Mafuta the Massive, Devourer of Worlds, etc).

These charts were made in accordance to the thoughts of alpha players earlier in Collective's history. They are generally what certain sections of the playerbase saw what mechanic affiliations the affinities should have. Many of their ideas can still be seen to this day in the current affinity identities as well as Tribal Identities and their corresponding deck types.

The devs of Collective later on demanded them to be marked as unofficial - possibly due to their controversial nature.

The charts are outdated and never precisely represented what the actual card pool implied the affinity identities to be. The new affinity identity tables now fulfill their purpose by being much more flexible and having been constructed and updated directly in accordance to the (standard) card pool. 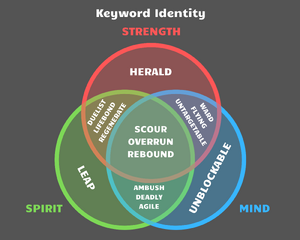 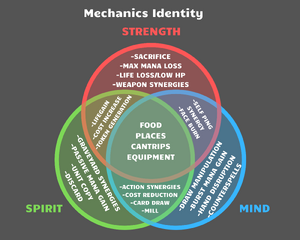 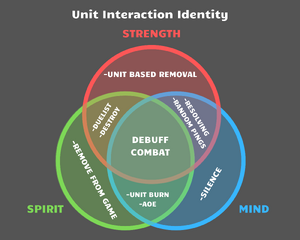